The EAAP would allow Dylan the opportunity to experience different aspects of engineering to help him decide which area he would most like to start working within. Dylan started TDR’s EAAP in September 2017 at TDR’s Training & Development Centre on Scotswood Road. In Dylan’s own words the EAAP programme ‘Is a good experience as I think it puts more responsibility on your shoulders than school did as you are responsible for the things you make. Also, it gives you a taste of every type of engineering to help you decide on what type of engineering you want to do as well as it gives you an insight into the engineering industry. It also built my confidence up as you had to meet people you never met before which resulted in some good new mates’.

Whilst on the programme, PACCOR, who are suppliers of sustainable plastic packaging solutions, based in Birtley, came in to speak to all of the students on the EAAP about careers in engineering with them and Dylan was extremely interested in the role of Apprentice Maintenance Engineer. He applied for the position and attended PACCOR for both an interview and work trial and was successfully offered an apprenticeship position with the company. Dylan started his role in April 2018 and is currently studying a Level 3 BTEC in Engineering. He is hoping to progress to HNC which will be supported by his employer on completion of his apprenticeship. He is really enjoying working for the organisation. The EAAP taught Dylan what it was like to work in the engineering sector and helped him to learn the theory behind different engineering systems. These were some of the areas that were discussed during Dylan’s interview with PACCOR (this was also Dylan’s first interview with TDR) so the EAAP massively helped him in his preparation. 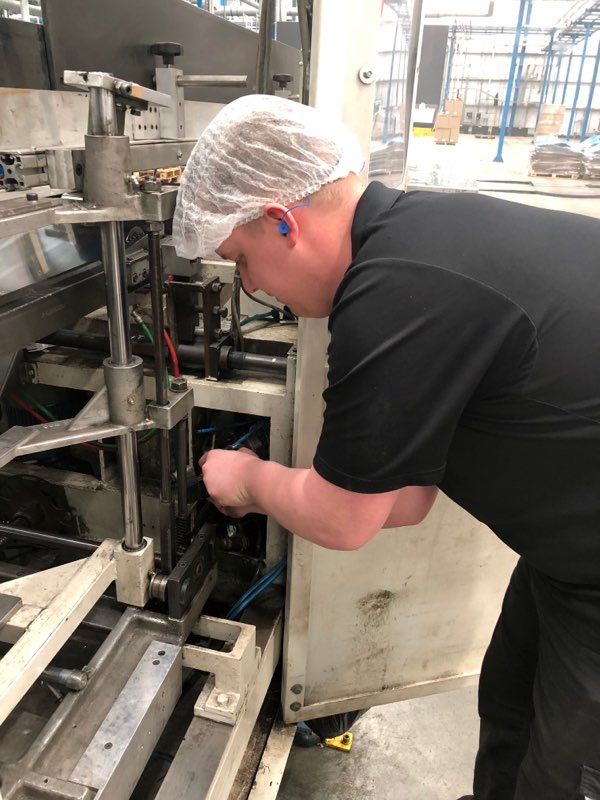 “Dylan joined PACCOR almost two years ago as an apprentice engineer. He spent his first year on day shift whilst still attending college studying for his BTEC Level 3. Dylan is now working on a full continental shift pattern with two very experienced engineers, who both have extensive electrical and mechanical skills. Dylan is a breath of fresh air and is a great ambassador for young engineers. He is a very polite, respectful and well-mannered individual. Dylan is a really good addition to the engineering team and fits in really well. He is hungry for knowledge and listens and learns at every opportunity. His attendance and attitude is exemplary, his reports from TDR have also demonstrated this. He is progressing really well with his course.

Going forward, I’m convinced Dylan will have a successful and prosperous career in engineering and deservedly so. It has been a personal pleasure watching Dylan develop as well as he has, over the last two years”.

Dylan’s advice to anyone thinking of joining the EAAP is:

“It can definitely be hard and the days can be long, however, in the long run it is worth it because you get the relevant skills to go into the engineering sector and have the best chance of getting an apprenticeship on completion of the programme”.

He would not hesitate to recommend anyone to join the EAAP, saying

“The EAAP was the start and very positive experience throughout my journey with TDR. As an organisation, TDR definitely look out for you and help you as long as you are willing to do the work. It gave me an experience into every part of the engineering industry which then helped me decide on which type of engineering I wanted to progress in. I ended up coming out of the EAAP programme confident and with an apprenticeship which I enjoy. TDR look after you and the people I work with help me with anything I need and help me improve my skills. Throughout the whole process, TDR has supported me whenever I needed them to and have helped massively to get me to where I am today, so it was definitely worth doing”.

‘Dylan was an excellent student. His work, attitude and enthusiasm were always spot on. His hand skills and workmanship on all sections of the Training Centre were very good, in particular, the welding section’.

If you are interested in joining TDR’s Engineering Apprenticeship Access Programme (EAAP), please complete an application form. Alternatively, for more information, please call 0191 4911505 to speak to a member of the team or email bss@tdrtraining.co.uk and someone will call you back.